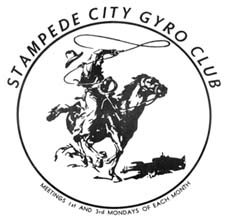 The Stampede City Gyro Club consists of men, both working and retired, but all of like ethics and principles such that bonds of friendship form.  Membership, which is by invitation, ranges in age from under 40 to 80+.  The club was chartered in 1962.

The Club meets at least twice each month from September to June.  The meetings normally include dinner and a variety of activities such as bowling, dart tournaments, tours, etc or a guest speaker.  Gyro business is kept to a minimum and while many Gyro clubs do support and contribute to community projects, the primary purpose of coming together as Gyros is for “friendship and fun”. The ladies are also involved in the many additional Gyro social activities during the year (usually at least once per month) as well as at District and International gatherings.  It is difficult to find a time when Gyros and their partners are not having fun.

The Stampede City Gyro Club is part of Gyro District VIII which consists of 10 Clubs located in southeastern British Columbia, in Alberta and Saskatchewan in Canada and in northern Idaho in the United States of America. Normally Gyros and Gyrettes get together for a Convention each year with the other Gyro Clubs in the District.  This gathering, while mostly a time for fun, is also when the managing of Gyro affairs for the year is done.  Other District and regular inter-club activities include an annual curling bonspiel (“Curlarama”) at Banff each November and golf during the summer.  These District activities are all opportunities to travel, make new friends, renew old friendships, and have fun.

Gyro exists throughout North America and the sole purpose of this organization is to promote “Friendship”.  Gyro came into being in 1912 when three college chums decided that their friendship, which had crystallized through their college years was worthy of perpetuation.  Gyro carries with it no label of race, creed, political, or other club affiliation.   Gyro International, through participation by representatives from each of the Districts together with an International Executive, provides a link tying together all Gyros  cultivating and perpetuating the ideals and objectives of Gyro.

The name “Gyro” was derived from the principle of the rapidly spinning gyroscope.  It maintains a remarkable steadiness in the orientation of its spinning axis and resists being deflected to any new orientation.  It is said to have power, poise and balance.  These attributes apply to Gyros. We welcome all men of good character to join us.