Gyro came into existence in 1912 in Cleveland, Ohio.  Three young men had just graduated from university and formed a club, later to be named a Gyro Club, to continue their good fellowship that had developed during their college days.  Gyro first came to Canada in 1919 with the first club formed in Toronto.

In 1920 some prominent Calgary businessmen including Clarence Lougheed and OC Arnott were visiting Banff.  Clarence Lougheed was the uncle of former Alberta Premier Peter Lougheed.  They observed a group of men, all wearing Gyro lapel pins, having a wonderful time with no other apparent reason then enjoying each others company. They struck up a conversation with these gentlemen to find out more about them and the club they represented.  When they learned of the purpose and objectives of Gyro, they were so impressed they immediately stated gathering a group of Calgary businessmen together to form the Gyro club of Calgary.

The first club in Calgary, the Gyro Club of Calgary, officially came into existence in 1921.  This club was immediately successful and membership rose to a high of 200 by 1927.   What was it about Gyro at that time that caused such a serge in popularity? An appreciation of the ideals of the early founders of Gyro Clubs can be gained by reading the preamble to the Calgary Gyro Club’s first 1921 constitution:
“We the undersigned do declare ourselves an association of young men gathered together to further the interests of members by bringing together in one organization an all inclusive representation of commercial and professional activity, to encourage the discussion of commercial and civic questions, and make business a more pleasant occupation by the promotion of genuine friendship, based upon the belief that personality is a much neglected factor in business.”

The Stampede City Gyro Club came into existence in 1962 with the help of the Calgary Gyro Club.  Larry Himmelman was the President of the Calgary Club at that time and another member, Gordon Hanna was 1st Lt. Governor of District VIII in 1962 and they, together with other members of the club, gathered together a group of young men who were becoming interested in Gyro.  One was a young man, Bob Dixon, who had recently become a Gyro while at UBC and had moved to Calgary to teach school.  And Bob recruited a fraternity brother from UBC —— Richard Duncan.  And Richard invited his brother Jim Duncan.  Other Calgary Club Gyros such as George Oliver, Stuart Colpitts, and Ron Newport assisted in recruiting other interested young men. Many of these were already friends or “sons-in-laws, or business associates.  The Calgary Club introduced the concepts of Gyro to these young men by hosting a number of social events. 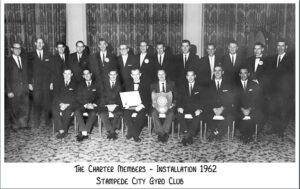 The Stampede City Gyro Club was the 192nd club admitted to Gyro and its charter was signed on October 22nd, 1962 with 24 founding members.  Sponsors were the Calgary Gyro Club and the Lethbridge Gyro Club.  Maurice Klinkhamer, of the Cranbrook Gyro Club, was District Governor and the Installing Officer.  Bob Dixon was the first President and Richard Duncan the first Secretary-Treasurer.  The formal Chartering of the Club and Installation of Officers was a “black-tie” party held at the Palliser Hotel on Nov. 3rd, 1962. 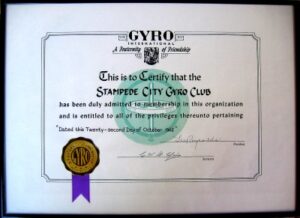 In the early years the club increased its membership, however, with many of the members just beginning their business and professional careers, some were subject to transfers out of the city.  Many of these joined a Gyro Club at their new location and some later returned to the Stampede City Club.  Over the years membership has ranged from twenty-five to as high as forty.  As with most Gyro Clubs the Stampede City Club is not a service club but has continued to support several charities, bursaries, and other donations over time as well.  In 2012 we celebrated 50 years since inception and four of the Stampede City Club founding members were still active in the club.  These were Jim Duncan, Richard Duncan, Bill Atchison and Nigel Way. Currently, in 2021, Nigel Way is the only founding member still in the club.

The spouses of the Stampede City Gyros have also played an important role in the success of the Club.  Their support and participation in club activities has greatly contributed to the Club. Skits and musicals have been a great part of the camaraderie at club functions and district events.  As well, the spouses (Gyrettes) play a key roll in helping to bring new Gyros and their spouses into the organization.

The Stampede City Club has made a contribution to Gyro having supplied District and International Officers as follows: