Each year, usually in early November, Gyros from District VIII clubs travel to Banff (or sometimes Canmore) for 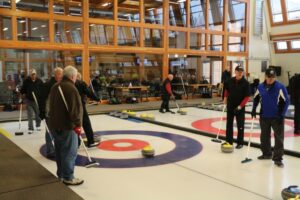 an “all male” weekend of fun, friendship and competing (as only Gyros can do) at the game of curling (to us Canadians it is known as a “bonspiel”). Our bonspiel is officially known as “CURLARAMA”.   Participation usually ranges from 60 to 80 keen curlers, managers and observers. Clearly this is an important and much looked forward to Gyro activity in Western Canada. 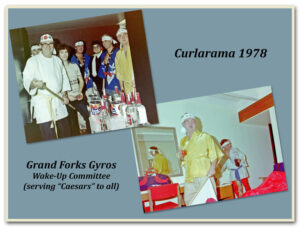 lers arrive on Friday afternoon and spend the evening swapping stories, eating, etc., and of course getting instructions for the next day’s competition. Saturday sees all teams competing throughout the day and naturally a few “more skilled” (or lucky) teams advance to the championship rounds held on Sunday morning. We have a fun filled banquet on Saturday evening and in recent years a friendly “Texas Hold’em” poker tournament also fills out the evening for many. A few Gyros are known to go exploring the downtown hot spots of Banff during this free time too.

The origins of Curlarama are uncertain but it seems this annual event has been in existence since the 1950’s. In the earliest days it may have been only the Calgary & Lethbridge clubs meeting or possibly it was part of early “District Interims” with only the attending club executives involved. However, we do know for sure that for more than 40 years Curlarama has been an annual event in Banff or Canmore with all of District VIII invited. The two Calgary clubs (Calgary & Stampede City) take turns organizing the event. In recent years the invitation has also been extended to our neighbors in District IV and usually one or two teams from “The Albernis” participate.

Countless Gyros have been introduced to Gyro for the first time by being invited to Curlarama as guests. 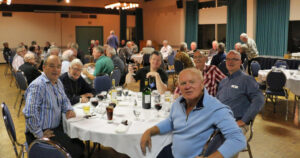 Curlarama continues to be an outstanding opportunity for a guest to realize he is amongst a most friendly group whose sole purpose for being there is to relax and have fun. A remark once made by one of our senior Gyros after a final game that neatly sums up the “Curlarama Experience” is: “IT’S NOT ABOUT THE CURLING”. Curlarama is often advertised as “the most fun you can have on a weekend”. When fall approaches, stay alert for news of the application process and prepare to have fun!